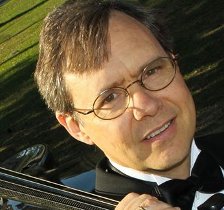 Mr. Taylor studied with Harvey Shapiro at The Juilliard School from 1980-1985 where he earned a Bachelor and Master degree in music and was a recipient of the Eva Shapiro Memorial Scholarship. Before attending The Juilliard School he was a member of the Toledo Symphony and principal cellist of the Little Orchestra Society of Toledo. While in New York he served as principal cellist of the Juilliard Conductor's Orchestra, and was a member of the National Orchestra Association Orchestra. From 1987-1992 he was a member of the Savannah Symphony and also played with the North Carolina Symphony, Charleston Symphony and Jacksonville Symphony. He has been on the faculty of Valdosta State University since 1992 where he has served as the principal cellist of the Valdosta Symphony Orchestra, the cellist of the Azalea String Quartet, and the primary cello instructor.  He has appeared as a soloist with the Toledo Symphony, Little Orchestra Society of Toledo, Brevard Music Center Orchestra, Savannah Symphony, and the Valdosta Symphony. He performed the American premier of Johan de Meij's "Casanova" in 2001 and the world premier of Arthur Rodriguez "Elegy and Rondo" in 2009 with the VSU Wind Ensemble.

"He showed complete control of the music, playing with a smooth technique and a warm, rich tone."

"The concerto's difficulties proved to be no obstacle to Mr. Taylor. He negotiated the double-stops and various other technical obstacles with disarming ease. The most impressive quality in his playing is the maturity of his musical insight."