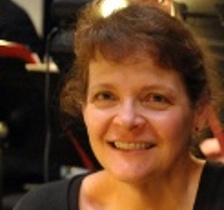 Susan Eischeid currently holds the positions of Principal Oboe with the Valdosta Symphony and Professor of Music at Valdosta State University where she teaches oboe, chamber music, and music history. She received her Doctor of Musical Arts degree in oboe from the University of Cincinnati College-Conservatory of Music and her Master of Music degree from the Philadelphia University of the Arts. Dr. Eischeid played for several years with the Mexico City Philharmonic Orchestra. She is an active solo recitalist and clinician, both nationally and internationally, and has performed with multiple orchestras across the country.

Dr. Eischeid is a long-time member of the Eastern Festival Orchestra and serves on the oboe faculty of the summer Eastern Music Festival in Greensboro, NC. Her major teachers include Robert Bloom, James Gorton, and Sara Lambert Bloom. In 2004 she was awarded the Excellence in Professional Activity Award from the College of the Arts at VSU and in 2017 was recipient of the VSU Presidential Excellence Award in Research.

Dr. Eischeid commissioned and appeared as soloist in the world premiere of the second oboe concerto by noted Hungarian composer Frigyes Hidas. She has commercially released her first album, Mystic Chords of Genocide, on the ACA Digital label. She has also appeared as soloist with the Valdosta Symphony Orchestra, most recently in performances of the Bellini Concerto and the Mozart Sinfonia Concertante.

Dr. Eischeid is also an author, publishing her book titled “The Truth about Fania Fenelon and the Women’s Orchestra of Auschwitz-Birkenau” in July of 2016. As an outgrowth of her research into music of the Holocaust, she has presented lectures and recitals in over twenty cities in the United States and in Europe and received multiple grants. Between 2005-2014 she was featured in performances in Germany, Austria, the Czech Republic and Poland. In March of 2010, as part of the Old First Concerts Artist’s Series in San Francisco, CA, she commissioned and premiered a new work for oboe, piano and men’s voices by noted German composer Stefan Heucke under the aegis of The Pink Triangle Project. In 2020 she completed her second book, a biography of Maria Mandl – the highest-ranking female officer at Auschwitz-Birkenau and founder of the women’s orchestra in that camp.