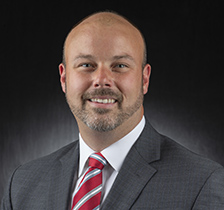 Joseph Robbins is Associate Professor and Department Head of Political Science at Valdosta State University.
He earned his B.A. and M.A. in Political Science and Public Administration from Eastern Illinois University (2002, 2003) and his PhD in Political Science from Texas Tech University (2008).    His research examines the underlying factors behind, and consequences of, party system development in Russia, East Europe, and throughout the world.  Aside from this, Robbins also studies the factors leading to, and consequences of terrorist attacks, as well interstate conflict.  His research has been published in journals such as: Comparative Politics, Comparative Political Studies, Party Politics, the Journal of Peace Research, and Electoral Studies among others.  In addition, he has secured grant funding from state and national agencies.  Dr. Robbins also has served as a peer-reviewer for many of the leading political science journals and has been a paid reviewer for Quality Matters (online course reviewer) and for publishers such as Pearson, Cengage, and Sage.  As well, Robbins was invited to deliver a series of lectures for the US State Department in Azerbaijan (November 2014) and to the Contemporary American Theater Festival (August 2015).