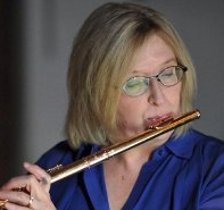 Dr. Elizabeth Goode is Professor of Flute at Georgia’s Valdosta State University, where she also is music director for the VSU Flute Choir and Flute Quartet.  A highly sought-after performer and teacher, her students have gone on to further music studies at the Boston Conservatory, Harid Conservatory, Boston University and the Florida State University, among others.   Dr. Goode has also served on the faculties of Maryville College and the University of Tennessee.

A native of Sweetwater, Tennessee, Elizabeth Goode holds Bachelor and Master of Music degrees from the University of Tennessee, where she studied with John Meacham and Tyra Gilb.  She also holds the Master of Music, Master of Musical Arts, and Doctor of Musical Arts degrees from Yale University, where she was a student of Thomas Nyfenger.  She has also been a student of Samuel Baron and Judith Mendenhall, and has participated in masterclasses with Peter Lloyd, Keith Underwood, and Jeanne Baxstresser.  Dr. Goode is proud to carry on the great teaching legacy of her primary teacher, Thomas Nyfenger, whose emphasis was on training great musicians, not merely great flutists.

An avid proponent of chamber music, Goode currently serves as flutist in the Scirocco Quartet, Exit 18 (a new music chamber group), and the Blazerquintet.  She has participated in the Norfolk and the Tamworth Chamber Music Festivals, and was formerly a member of the Tennessee Woodwind Quintet, the Cypress Chamber Players, and the Yale Bach Aria Group.

Dr. Goode is a frequent adjudicator at various state and national competitions.  She has also served as a clinician and performed at many state and national conventions, including those of the National Flute Association, Florida Flute Association, College Music Society, American Society of Composers, Music Educator’s National Conference, Atlanta Flute Club, and Raleigh Area Flute Association. She is also a frequent invited guest for masterclasses at colleges and universities throughout the United States.  Her article, “Good Vibrations: A Practical Approach to Intonation,” was published in Flute Talk magazine, a division of The Instrumentalist.

In addition to her flute-related duties, Goode is also chair of the Music Theory area at Valdosta State University.  She has taught Freshman and Sophomore Music Theory and Ear Training, and Introduction to Schenkerian Analysis (she studied Schenkerian analysis for two semesters with Allen Forte at Yale).