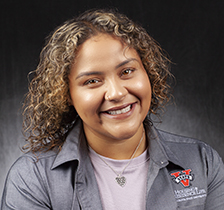 Erica Chaviano is originally from the Bronx, NY and officially joined the HRL team July 2016 after her amazing ACUHO-I internship experience over the summer of 2016.  She graduated from SUNY Buffalo State with a B.A in Communication Studies and a Minor in Creative Problem Solving, spring 2014.  She recently also received her Master’s degree in Higher Education and Student Affairs Administration from SUNY Buffalo State, summer 2016.

In her spare time Erica enjoys spending quality time with her Pit-Bull Puppy Kiki, family, friends, and Sorority sisters.  She recently has discovered a deep passion for traveling, and meeting new people.  Erica also enjoys spending time with her staff, playing an intense game of Spades, board game nights, or Bingo as long as the outcome is always good vibes only. If you see Erica on campus say hey J