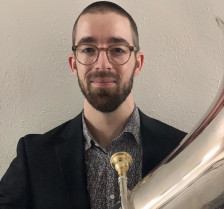 Ben Vasko joins the faculty at Valdosta State University as Lecturer of Tuba and Euphonium and Principal Tubist of the Valdosta Symphony Orchestra in Valdosta, GA. During the summer, Ben is a brass instructor with the 19-time DCI World Champion Blue Devils Drum and Bugle Corps. He has had success as a semi-finalist and finalist at various national and international competitions.

Ben has performed professionally with groups throughout the US and Mexico. His jazz and commercial playing are also regularly in demand. Ben’s playing/arranging can be heard in commercials for companies like Ford and State Farm. Additionally, he has been a finalist for tuba positions in multiple premiere military bands, the Walt Disney World Main Street Philharmonic, and the Boston Brass.